News collects all the stories you want to read
Features
1.7K

Journeymen: The Art of Survival

Listen to the Beyond The Ropes Podcast by clicking here!

“He’s a bum, a fucking bum” and so continued the equally negative rhetoric aimed at Nathan Gorman’s opponent, on October 20th, a certain Kamil Sokolowski. The large majority of these naysayers took umbrage with Sokolowski’s 12 losses which, by default, must mean he’s an utterly useless “Polish plumber”.

Whittle back to June when Gorman was facing Sean Turner and “Big Sexy” was being hailed by the same people as a decent step up for Warren’s “second-favourite heavyweight prospect”.  The very same Sean Turner that was outpointed 77-75 by Sokolowski four fights previous.

That’s the smell of hypocrisy. Or naiveté. Probably both.

This is the crazy art of being a journeyman. The foundations of many a world champion will have been mastered over rounds and rounds at the beginning of their professional careers against men with losses by the dozen – whilst it won’t look too great on BoxRec for anyone just glancing, the lessons learnt will be invaluable.

Journeymen being misunderstood really struck me when I was explaining their role to my girlfriend and she ended up under the impression that they were just terrible fighters who turn up, get paid and go home – oh how wrong she was!

Collecting a starting fee of around £1,100, fluctuating according to stature of opponent, number of rounds, promoter – to name just a few factors – these reliable operators tour the country week in, week out to test the latest prospect and teach them some harsh realities of professional boxing.

It’s not as easy as it sounds, not by any stretch of the imagination. You have to be ready at all times because, a fair amount of the time, you’ll be a late replacement. Ricky Leach, for example, curtailed his holiday just weeks ago in order to take a four rounder against, Commonwealth champ, Ashley Lane on less than 12 hours’ notice.

As a journeyman you can’t just crumble when an onslaught is launched for a KO loss results in a, mandatory, 28 day suspension from the British Boxing Board of Control and, with that, a loss of earnings up to anything like £4,000. Thusly you’ll find these men, who choose to fight for the love of the sport, ridiculously tough and willing to take the best that many can throw.

People can’t understand why journeymen lose fights all the time

Physical strength and durability still isn’t enough to guarantee success as a journeyman, a certain mental fortitude is required to rack up the losses and not get disheartened. Sure, it’s a job but we’ve seen it plenty of times before where I fighter gets their first loss and suddenly loses motivation. There are differences between a prospect and journeymen losing but the principle remains the same.

The nation’s favourite journeyman – as he’s been dubbed by Southpaw Jab – Lewis ‘Poochi’ van Poetsch explained to me the most common misconception about the craft of fighting in the away corner, “People can’t understand why journeymen lose fights all the time and seem to think I lose on purpose… they think it’s like the Krays and Mafia fixing fights. I always get the question whilst people give a smirk; “so, people are betting on them at ringside is it?” I just tell them they’ve watched snatch too many times!”

Make no mistake, as a prospect, it will not all go your own way with the likes of William Warburton, Youssef Al Hamidi all willing to put the foot on the gas and engage in a fire fight if they spot any chinks in the armour. Journeymen aren’t there to roll over, they exist not just to provide experience but to separate the cream from the crop.

People often say “well, what’s the difference between fighting ‘journeyman x’ in your first fight and ‘journeyman y’ in your fifth fight” and whilst that point is perfectly valid to a large extent, each fighter brings different facets to the game. Someone like Rudolf Durica is going to be a little rougher, a little dirtier on the inside in comparison to a guy like Yailton Neves or Anthony Fox who will fight on the front foot, applying more pressure.

Lydney’s van Poetsch described what he tries to bring to a bout, “I get work by being durable and tough, making a fight of it and making it entertaining. The promoters are happy as, as you know, I’m not the average boxer, I come with the old school look and antics during ring walks. So I think personally I add value for money to the fight.”

What we’re seeing nowadays is a move away from the stereotypical Eastern bloc fighter and back towards the, good old fashioned, British journeyman – a name that a face can be put to and, thusly, seems to garner more respect from general fight fans. This, believe it or not, is influenced by Brexit with foreign fighters demanding more money and, as a result, domestic equivalents receiving more frequent fight dates and, hopefully, the financial rewards to match.

Without them there is no boxing

Speak to the likes of Kris Laight or Lewis van Poetsch and they’ll be able to tell you, better than anyone else, who is the real deal and who’s got a fair bit to work on. Their experience is aimed at making the opponent look bad but with full expectation, from the home corner, that their man will be able to negate that all and emerge a convincing winner.

Miles Shinkwin, fighting for the English title on December 1st, told me he wouldn’t be the fighter he was today but for the lesson learned in his opening few bouts –

“They keep the boxing world spinning. Without them there is no boxing. They’re as important as the big stars in aiding development.”

The thing about these fighters is that they aren’t BAD, you simply cannot be a good journeyman and be a bad boxer – the two cannot coexist. You need to know the ropes – quite literally on some occasions – work your way around the ring and do yourself justice with a decent showing of your own else the phone will suddenly stop ringing.

Look at Craig Derbyshire, Nathan Hardy, Jamie Speight, Sokolowski, Anthony Fox, they are all Area level fighters when given the opportunity to loosen up and really go at a fight with a full camp. Indeed Derbyshire and Speight ARE Area champions – Derbyshire a Central Area titleholder at two weight categories.

Oftentimes you find that if you give a journeyman eight, ten rounds, they are far more dangerous than over the short burst of four sets of three minutes.

Van Poetsch is a man who has perfected his role as a journeyman – 26 bouts under his belt already this year – and I asked him if it irritated him when people bandied around “the J word” in a derogatory manner; 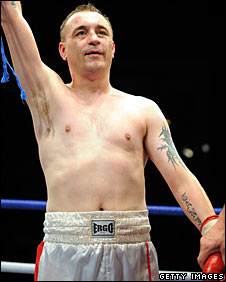 “People that know boxing know boxing, people that don’t know boxing don’t know what a journeyman but you can’t be a bad boxer and be a journeyman, it’s simple. You’ve got to know your way around a ring and look after yourself. People who look at my record or Kristian Laight’s record will think “fucking hell he needs to give it up, he hasn’t won in about 100 fights” but people who know boxing, like yourself, will say “actually, he’s quite decent”.

I was going to say something quite ambiguous like “as a journeyman you just can’t win, can you?” but these guys are the beating heart of the sport we all love.

For every Anthony Joshua there will be a dozen Peter Buckley’s who, across every weight division, put in the hard work to carry prospects one step closer to fulfilling their dream. Of course there is the nifty slice of money in the back pocket but, let’s be clear, it is their love and passion for boxing that keeps them going, the money is just an added bonus.

Few fighters will start on their journey with the expectation of being a journeyman but, through choice or circumstance, these guys keep the sport grounded and, for that, deserve the utmost respect.

A Night With Joe Calzaghe

By Jordan Ellis @JordanEllisUK A legend of British boxing headed to Liverpool last weekend. Unfortunately, it wasn’t to fight those days …